After many centuries of Christianity the Church of Rome extended its influence with the coming of the French-speaking aristocracy. By 1192 direct links with the papacy had been established. Monastic settlements, like Sweetheart Abbey, introduced large-scale sheep farming to the landscape, and so have much to answer for. About that time there were probably chapels at Craigturra and Kirkconnel. Tynron parish was delineated in the time of David I and included in the diocese of Glasgow. The kirk was organised and Tynron (also Penpont and Dunscore) was put under the aegis of the monks of Holywood, near Dumfries, founded circa 1225. The monks of Holywood were of the Premonstratensian order and they did their best to bleed the parish dry.

Some excavation was done by Tom Affleck at Kirkconnel in 1983 on a prominent spur beside the aptly named Dry Burn. This showed the remains of a small rectangular building, probably a chapel, with stone walls some 80 centimetres thick. Affleck takes it as seventh or eighth century originally, as it is typical of such hermitages in its isolated position. His article in Glencairn Parish Magazine Summer 1984 gives more detail.

St Conall himself probably never lived there, but the chapel was dedicated to him later. Others think that St Conal, 612-52, who was a Scots missionary from Ireland did indeed live there! St Connel’s Chapel and Well have long been marked on the OS maps and there is still a beautifully clear spring. Sitting up there on a summer evening, wondering what it would have been like, is a great pleasure. Beside the chapel is a network of small fields, unusual in Tynron, dating from much later than the chapel, but evidence suggesting that the chapel was a self-supporting community.

The “chapel” at Craigturra is even more of a mystery. It must have stood up behind the present Craigturra cottage. This is the land of Chapel, mentioned on old deeds, which Wilson says was the place of worship of St Cuthbert in the fifth century. An old well is still visible, though partly-covered, behind Craigturra cottage.

Tynron village existed in the twelfth and thirteenth centuries, as a small hamlet of farmers, with the kirk, manse and glebe (the minister’s farm). The kirk was endowed with a ploughgate of land, supposedly the area of land which could be ploughed by one ploughteam in a year. A ploughgate was about equal to a merkland, 13/4d Scots, 104 Scots acres or 130 English acres.

The rent for the glebe was paid to the minister, who also nominally received the teinds, a tenth part of the parish produce. However, it was Holywood Abbey that usually took the teinds and appointed their own minister, who was often a canon from the abbey.

In 1559/60, with the Reformation, Roman Catholicism was outlawed, the power of the monasteries suppressed and church property confiscated. Catholicism was replaced by the Episcopal Church. Holywood Abbey was plundered. The ruins lie within the present churchyard at Holywood. In 1587 the lands of Holywood Abbey in Tynron went to the king and in 1617 the king granted them to John Murray of Lochmaben as the Barony of Holywood.

In Tynron the vicar since 1540, Robert Welsh, conformed with the Reformation and remained until he died in 1568. The Reformation in Dumfriesshire met some resistance and indifference and locally it was a slow change rather than a revolution.

The patronage of Tynron church went into the lay hands of Sir James Douglas of Drumlanrig in 1591. This meant that Sir James appointed the minister, but in return he paid the stipend and maintained the church building, manse and glebe. This controversial right of patronage was not ended until 1875.

In 1660 Charles II was crowned on condition that he sided with the Covenant. However the following years saw Charles II persecute all who did not subject themselves to the king as head of the church. Ministers were asked to take the oath of subjection to royal supremacy. Most ministers in this area became outlaws, field preachers, and their congregations largely supported them. The people of Tynron were largely on the Covenanters’ side. This made life difficult for the curate put in the minister’s place.

Unfortunately many of the large landowners locally, depending for their land and power on the king, began a cruel tyranny and persecution. Grierson of Lag, with his aforementioned Tynron connections, was one of the leading Episcopalians and was responsible for viciously putting down the Covenanters in the area. In doing so, Lag was able to hold on to his lands. If he had not sided with the king he would have lost his lands and power and would have become an outlaw himself. This in no way justifies what he did. It is an age-old excuse. The remains of Lag Tower, near Dunscore, can be seen at 880861.

Colonel James Douglas of Stenhouse was against the Covenant, “a violent persecutor of the people of God, and many he harassed and fined on account of their religion, and being a Papist he was Secretary of State for Scotland for James VII” (Rae). The following appears in the register of the Decreta of the Privy Council, of date 5th February 1680:—” The Lords of his Majesty’s Privy Council being informed that John Douglas of Stenhouse, in Nithsdale, was lately invaded in his own house by a number of the rebels, who committed divers outrages and violences upon him, robbed and pillaged his house, and carried away his goods, out of malice and prejudice against him because of his affection to his Majesty’s Government,—the said Lords do recommend to the Lords Commissioners of his Majesty’s Treasury, to cause the said John Douglas of Stenhouse to have reparation of the damage he has suffered by the said rebels, out of the moveables of any persons in Galloway or Nithsdale who were in the late rebellion.” So Douglas was not a popular man locally.

Wilson of Croglin, however, gave a measure of protection to the Covenanters. With parties of soldiers moving about, who were often little more than licensed bandits, life in Tynron in the 1680s was like living under an army of occupation, with sporadic guerrilla warfare.

Tynron parish had its full share of the troubles and its own martyrs. Allan’s Cairn 698009, erected 1857 by Rev Peter Carmichael of Penpont, is set at Tynron’s boundary with Dalry, where are buried George Allan and Margaret Gracie, chased and shot on the moors. Buried in Tynron churchyard is William Smith, a 19 year old, shot near Moniaive in 1685, after being chased by Douglas of Stenhouse and Laurie of Maxwelton. William Fergusson of Glencairn was hotly pursued in 1684 by a company of dragoons in Tynron, who chased him up “the giddy eminence of Craigturrach”, overpowered him and he was banished to America by the proper authorities.

Success came to the Covenanters in 1688, when William and Mary took over and granted freedom of Presbyterian worship. The Presbyterians are often romanticised as heroes, but they in their turn persecuted not only the Episcopalians but also Catholics, Quakers, gipsies and witches, all regarded as outcasts. So life was still brief, unsettled and uncertain. Religious leaders and organisations were as much a threat as bad landlords, the weather and the English to the Tynron peasants. A booklet, The Nithsdale Covenanting Trail, is available with information on all the covenanting sites of the area, which were all well signposted in 1990. 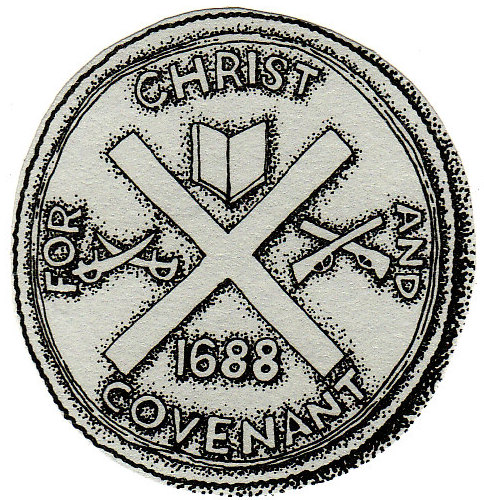 From 1579 the parish had to list its poor and make arrangements for poor relief. This task fell to the kirk-session, who looked after the poor of the parish until 1845 when the Poor Law took this duty away. The session raised money from collections and by fines for minor misdemeanours. Here is a snippet of ecclesiastical history, which exemplifies the power of the kirk, taken from Glencairn in 1694:

“John McConrik, in Tynron, is summoned to appear for “scandalous dryving an cow on ye Sabath out of ye parish of Glencarne”. John appeared at a future meeting, when Alexr. McGeachie of Dalquhat deponed that he “did see John McConrik on ye Sabath walking from Tynron throu Glencarne that sam day, and ye said John did return dryving a cow, and Alex. McGeachie did speak to ye said John, and said to him, “How would he be answerable to God or man for dryving ane cow on ye Sabbath””.

What was done to John is not stated!

In 1880 on May 15, Cairneycroft, a pleasant and romantic estate of 50 acres, tenanted by two humble farmers, was sold to Rev Ebenezer Hill, Free Church Minister at Lochmaben. The tenants’ houses required to be rebuilt and the property was being renamed Shinnel Wood.

Cairneycroft had been bought by Tynron Kirk Session in 1742 on the death of weaver, John Brownrig. Brownrigs had long ago been granted a charter for Cairneycroft by King Robert for the hospitality shown to him. From 1742 it was to be let on a 19 year lease and was the property of the poor of Tynron.

The revenue from the lands of Cairneycroft helped the poor of the parish and continued to do so after the Poor Law Act of 1845. The 20 or so parishioners on the poor roll in 1847 were also supported by the ratepaying landowners (the heritors). The board meetings minutes are available in the Ewart Library and make good reading.