These would have been just tracks through the forest, so for evidence of these tracks to be preserved would need a stroke of good fortune. There would have been some well-trodden paths, but perhaps not much in the way of through routes, as Tynron is hardly on a major crossroads or valley route.

When the Romans built their well-known road up Nithsdale, there is a tradition that there was a spur road up the glen, crossing Colt Hill at the top of the glen.

Unmade roads and tracks continued to be used until the eighteenth century. In the seventeenth century tenants had horses, which were used for bringing in crops from fields, transporting peat and stone and performing carriage services for the landlord, ie delivering cain rents or taking produce to market.

Unmade roads made wheeled vehicles impractical, so pack animals were used, for instance a horse could carry 2 cwt of wool. Heavier loads could be pulled by oxen or by using slypes for hauling hay, stone or peat. There would have been a few heavy two-wheeled carts drawn by a single horse. It was a good day’s work to get to Dumfries market with a cart.

Slypes or sleds drawn by horses were still used in Torthorwald in 1750, but were only a memory by 1790. They were replaced by two- or four-wheeled carts pulled by horses, or Queensberry might have had some heavier ox-drawn wagons.

Tynron, however, lay on the direct route, the post road, between Edinburgh and Galloway. This was the pilgrimage road to Whithorn and kings would have passed through Tynron. James IV passed through in 1507. General Roy’s Military Map of 1747 shows the old Edinburgh road, which runs through Penpont to Moniaive via Tynron and Hillhead. It was unmade and maintained to a minimum standard under statute labour by the men of Tynron parish.

The 1790s Statistical Account says roads were much improved in Tynron since statute labour. This had begun in 1669 (and ended in 1845) with the Highways and Bridges Act and meant that each man spent four days per year repairing, ditching, fencing and making the 13 miles of main highways 20 feet wide. Most of the time this meant throwing stones from one of the many roadside quarries into the biggest ruts. An excellent map of the Statute Labour roads in the 1840s is available in West Register House, Edinburgh.Tynron Kirk Bridge

A new stone bridge was built at Tynron Kirk in 1718, following the first county survey of bridges and highways, which found the roads very much decayed and almost impassable. The new builder was allowed timber and stone from the old bridge. The bridge was strengthened in 1724 for the post road, but needed repairs after 1764. It finally fell in the floods of 1782 and was rebuilt in 1783. It was again rebuilt after 1850. I saw an advert in the paper in 1851 for rebuilding and improving Tynron Kirk bridge. Plans and specifications were held by Mr Kennedy in Kirkland.

A new stone bridge was built at Tynron Kirk in 1718, following the first county survey of bridges and highways, which found the roads very much decayed and almost impassable. The new builder was allowed timber and stone from the old bridge. The bridge was strengthened in 1724 for the post road, but needed repairs after 1764. It finally fell in the floods of 1782 and was rebuilt in 1783. It was again rebuilt after 1850. I saw an advert in the paper in 1851 for rebuilding and improving Tynron Kirk Bridge. Plans and specifications were held by Mr Kennedy in Kirkland.

In 1801 the old bridge over the Scaur into Penpont was taken down and a new one built. This was at the time the whole Edinburgh road was improved. The old Scaur bridge had been of one semicircular arch, supported by two steep rocks. It says in the 1790s Statistical Account that it was not known when it had been built, but 1670 may mark the first substantial stone bridge, though it was widened in 1723 for carriages.

The Shinnel Bridge by the Ford dates from 1786.. It has been completely rebuilt to cope with timber lorries in 1996 and is now a fine bridge with wide pavements for some unknown reason. The bridge itself is interesting when viewed from below where it shows clearly the different stages of construction. Beside the bridge the foundations of a cottage, still in use in 1915, were mostly destroyed in the rebuild.

In December 1758 Christian Alison, a servant girl, going along a timber bridge at Mounthooly, Holmhead, the bridge fell with her and she died in the water and her corps was found near Killiwarran next morning.

The first proper bridges up the glen were Mounthoolie Bridge at Holmhead (previously Holmhouseford), dating from 1808, when it was an important crossing of the Shinnel on the Minnyhive-Sanquhar road and Laird’s Bridge over the Kirkconnel Burn in 1807. Shaw says the glen road still crossed streams by fords in 1862, with logs laid across for pedestrians. The bridge above Old Auchenbrack was not there till after Appin Lodge was built about 1880.

The Duke of Buccleuch was a good landlord and improved the glen road quite early in the nineteenth century, though even then the main roads themselves were passable only on horseback.

In 1789 Turnpike Roads were begun in Penpont. This gives us a definite date for another improvement of the Edinburgh-Galloway route. On one of these occasions the road between Clonrae and Craigturra was realigned. The old road can be seen on the south side of the present road.

The first Scottish Turnpike Act had been in 1750, but as usual progress was slow in the backwoods! This map of the Edinburgh-Wigtoun road, taken from Taylor and Skinner’s “Survey of the Roads of Scotland”, published in 1776, shows the Tynron stretch clearly. Tynron was 64 miles down the main road from Edinburgh to Whithorn! 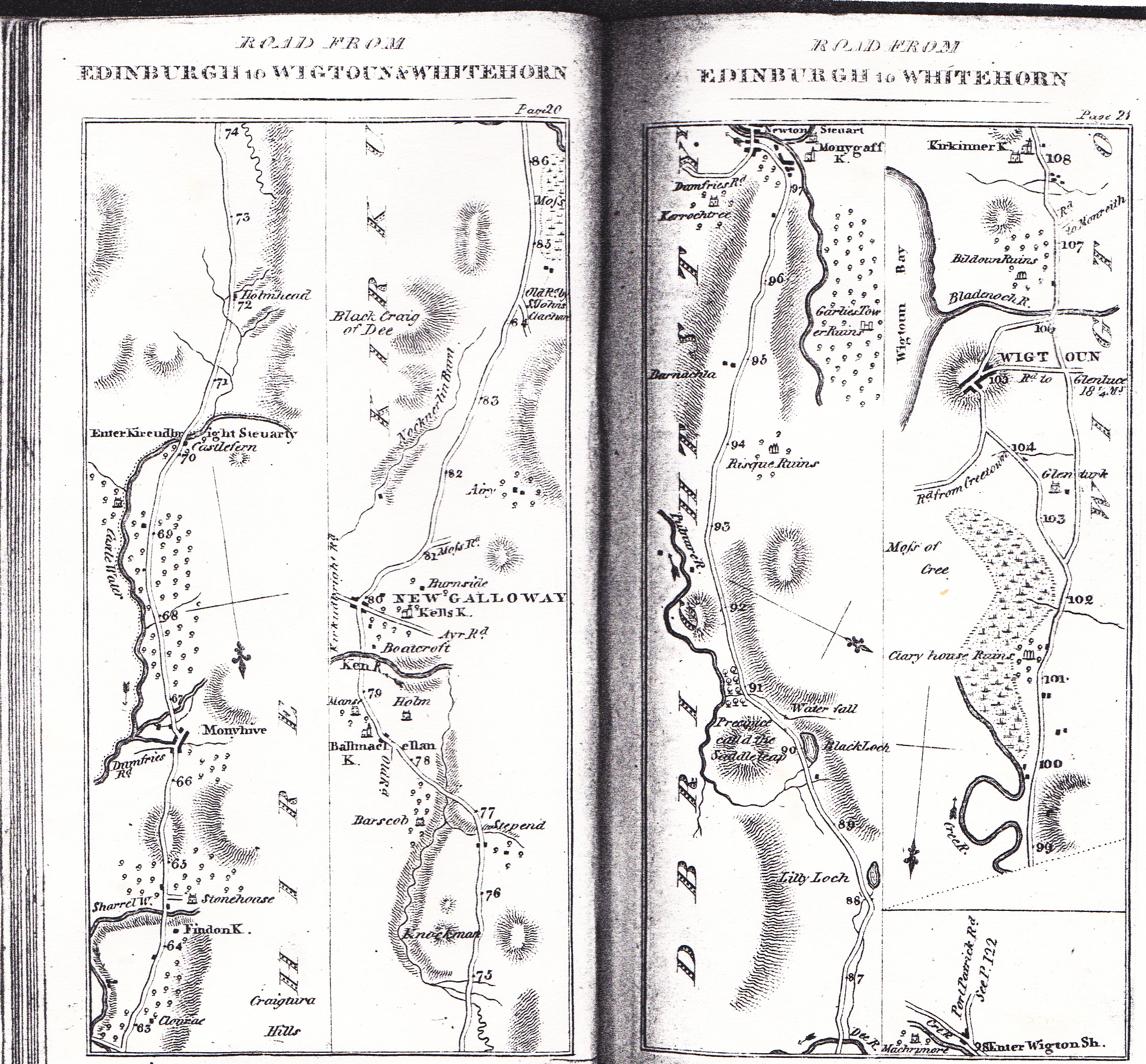 In 1836 there was a daily post between Moniaive and Thornhill and there were 15 miles of road in Tynron Parish, 14 maintained by statute labour and one mile of turnpike maintained by tolls. The one mile was from Scaur Bridge to Shinnel Bridge at the Ford. The Clone road is not in Tynron Parish. There were tolls in Penpont and at the bottom of the Dunreggan Hill in Moniaive, but there was no toll in Tynron. Tolls were abolished in 1878, when the county road trustees took over responsibility.

I am not sure when the Clone road, now the A702, superseded the Hillhead route, though most probably about 1800, when coaches started becoming a popular means of transport instead of horses and the Dumfries to Ayr road via Moniaive and over the Clone to Tynron was improved to take coaches. The first proper coach, The Craigengillan Castle, did not run this route until 1833. In 1865 an omnibus started between Moniaive and Thornhill Station. It is difficult to picture any coach crossing to Moniaive via Hillhead, when there was always the much easier, though rather longer, Clone route with 100 metres less climb.

The track through the Ford and Linnhouse to Tynron and beyond to Killiewarren was prominent still in 1896, but little used by 1922. The old drove road, previously mentioned, from Moniaive-Gled Brae-Bennan-Duddiestone Hass-Sanquhar is shown on 1896 OS map.

The records of the Road Trustees from 1843 are kept in the Ewart.

They had powers to raise money. In Tynron, for instance. they could raise 5d in the £ on the valuation. They reveal, for example, that the 300 yards of road from Macqueston to Shinnel Water was surfaced properly in 1883, so it was put on the list of Highways of Tynron. The Road Trustees were abolished in 1889 and the responsibility for the roads passed to the newly-formed County Council. The Trustees records are very informative. In 1845 from a total of £28 16s, the following were allocated:

It also states who the money was paid to, the surveyor and those responsible for the roads.

Examples: in 1854 Mr Kennedy of Kirkland was doing much road work and Mr Wallace was doing the Auchenbrack road.

In 1847 the Dalmakerran to Glencairn Parish road was added to the above list and the Strathmilligan road repaired, as was the road to the Manse.

The 1849 schedule for Tynron bridge to be widened and reconstructed was after a petition laid before the commissioners.

In 1851 the Auchenbrack road ran only to Appin march. The road was then extended towards Shinnel Head.

Also in 1851 it was agreed that the Mecklewood road, ie the present A702, should be maintained jointly by Tynron and Glencairn and that Glencairn should contribute towards the work on Tynron bridge.

In 1856 Mr Kennedy had done up the road to the manse and had built a wall along and encroached on the road and narrowed it. Mr Hunter at the manse had complained. The Trustees had to go and see to decide.

In the 1990s the roads are kept up very well by the council. Even the glen road gets regularly resurfaced and potholes are filled in quite promptly. The plentiful new lay-bys for the forestry vehicles are not unwelcome. The council are not quite so successful at keeping water off the roads. They get everybody moaning when the mechanical flail makes a hell of a mess of the roadside hedges and trees.

1990 saw the first decent signposts. The glen road up from Tynron no longer just has a no-through-road sign, and there are directions now to Tynron off the main road.

Two of the old granite mileposts are still standing, at Low Lann cottage (15 miles to the Midsteeple at Dumfries) and by Tynron Kirk bridge (16 miles).