I have looked over every possible reference source in the Ewart & Library, Dumfries and these are the ones I found most useful. They are in no particular order.

The Royal Commission on the Ancient and Historical Monuments of Scotland, 16 Bernard Terrace, Edinburgh EH8 9NX has all the historical and architectural monuments on a card index and on maps plus photos of listed buildings and aerial photos of Tynron. The National Library of Scotland on George IV Bridge, Edinburgh, EH1 1EW has a copy of any book or map for reference. I have used quite a few sections of maps in the parts of the book updated in 2017. Estate maps and OS maps are available online.

Tynron Parish Registers, births, marriages and deaths, available at New Register House, Edinburgh and Dumfries Archive Centre in Burns Street on Microfiche, 1743-1854. (Marriages and deaths missing 1783-1823. Later marriages give no place names). It’s not too easy to find them on Ancestry.

The Ewart Library has most of these records, all of the books, but it also has the records of Highway Authorities, County Treasurer’s Department, Tynron School Board and Log Books, the MacRae Papers, Newspaper Index, Photo Collection for Tynron, Map Collection, Electoral Rolls and Valuation Rolls.

Electoral Rolls from 1914 and Valuation Rolls from 1863 are also available at 27, Moffat Road, Dumfries. Staff there were very helpful.

The Domesday Disk contains information on Tynron by Tynron’s children and others. The disk is kept in the Ewart.

TDGNHAS = Transactions of the Dumfries and Galloway Natural History and Antiquarian Society; many articles with Tynron connections, including:

The National Map Library, 33 Salisbury Place, Edinburgh EH9 1SL has copies of every OS map available and is open to the public. First and second edition Ordnance Survey maps are especially interesting. The older maps are here too.

There are thirteen tops over 500 metres in Shinnel Glen. You have to be fit and mentally unbalanced to do them all in one walk, but the stupendous views are worth it.

Start at Countam. The 300 metre climb up from Old Auchenbrack takes 40 minutes. Countam to Bail is about 20 kilometres and the total climb, starting from Old Auchenbrack is about 900 metres, so it is the equivalent of doing a serious Munro. This was my schedule at my steady amble, pausing to speculate, cogitate, masticate and urinate. I then had the long walk into Moniaive, giving a total of nine hours.

High Countam 502m 02.22 The Southern Upland Way makes walking easier on this stretch, although ATV tracks can be followed for much of the way.

Lamgarroch 573m 03.46 It is tedious then retracing your steps.

Potentilla erecta. I have not included a section on wildflowers, as this would be an enormous undertaking. The glen is predominantly sheep pasture and the tormentil provides such a beautiful display on the cropped turf from June to September that I regard it as the flower that would always remind me of Tynron.

Dramatist, John Fletcher, expressed the widespread belief in the medicinal power of tormentil in the seventeenth century, when he wrote:

This tormentil, whose vertue is to part. All deadly killing poison from the heart

In the “Country Farme”, a book of rustic lore published in 1616, a powder or decoction of tormentil roots was recommended “to appease the rage and torment of the teeth”. Tormentil roots are grand for curing colic, diarrhoea and cystitis, so if you are suffering from all three it is a good bet, as there must be millions of tormentil flowers in the glen in July.

A local name for tormentil, blood root, refers to a red dye extracted from the roots and used to colour clothing. Tormentil roots were also used as an alternative to the oak bark in tanning hides, their highly astringent quality proving ideal for the purpose.

The tormentil’s buttercup-like golden-yellow flowers are in bloom from May to September and secrete a nectar that attracts pollinating insects. In wet weather or at night, when the four petals close up, the tormentil flower has the clever ability to pollinate itself, producing up to twenty fruits on its seed head.

Vanessa Gourlay’s beautiful watercolour shows the height tormentil can reach on ungrazed land. Sheep obviously enjoy it and munch it down to the level of short grass pasture. 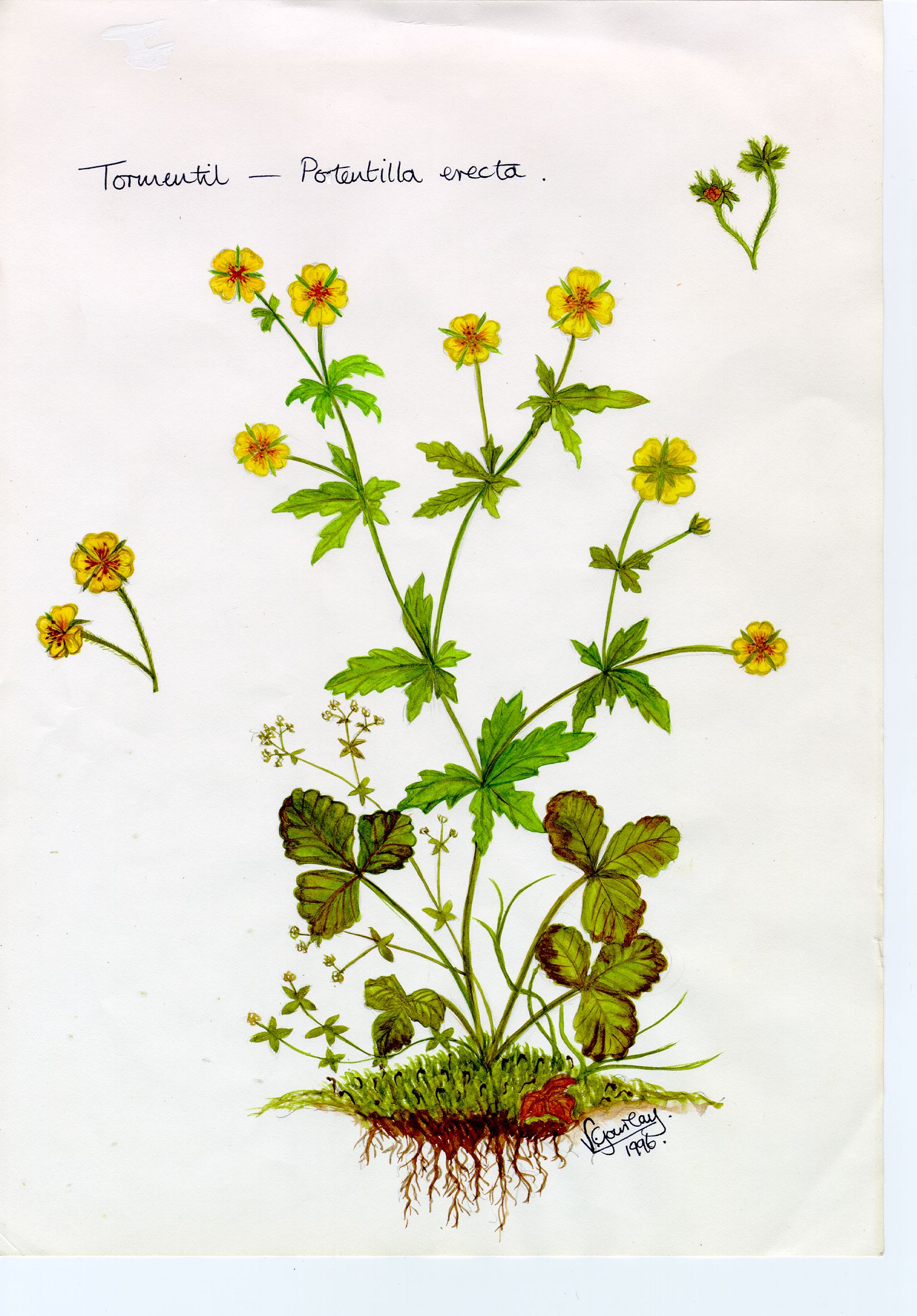