The mills of Tynron make a fascinating topic. Almost every farm had a mill of some sort at some time. Here is a subject for industrial archaeological research.

Water-driven threshing mills came in between 1800 and 1850. Once one farm had one, the others wanted one, as they saved the most arduous and unpopular labour. By 1812 threshing mills were already common in Dumfriesshire, the latest thing, in fact, although Shaw says only one was working still in Tynron in 1894.

At Low Lann the millpond is still there and so was the mill wheel until it was removed in 1991 to Keir Mill in order to make alterations to the steading. The feeder pipe is still in situ and you can see where the wheel was on the north-west side of the farm buildings.

At Barr the drop is still there, where the wheel was. The millpond is up the hill by the main road at 824917. The long mill lead still runs along the dyke by the road. The lead runs down from Low Lann millpond at the top, which could also be used for Barr, and from a third dam just over the Maxwelton dyke. No mill is shown here on the 1845 estate map of Capenoch, but it is on the 1856 OS map.

At Lann Hall there was a silted up pond, which has been dug out a little, fenced off in 1994 and planted with trees. The remains of the sluice-gate can still be seen, but I have no idea whether it was a millpond or where the actual mill was, if indeed there was one, as it could have been created just for shooting. Hugh Gladstone shot a teal on it in 1908.

Killiewarren miraculously still has the mill wheel. It is an overshot wheel in an advanced state of disrepair, but in situ. It was fed at the top by a pipe, which is also still there, running on iron rails, feeding from a small dam just to the rear. Killiewarren mill was still used in the 1940s for threshing. When there was enough water, threshing could go on for the whole afternoon. 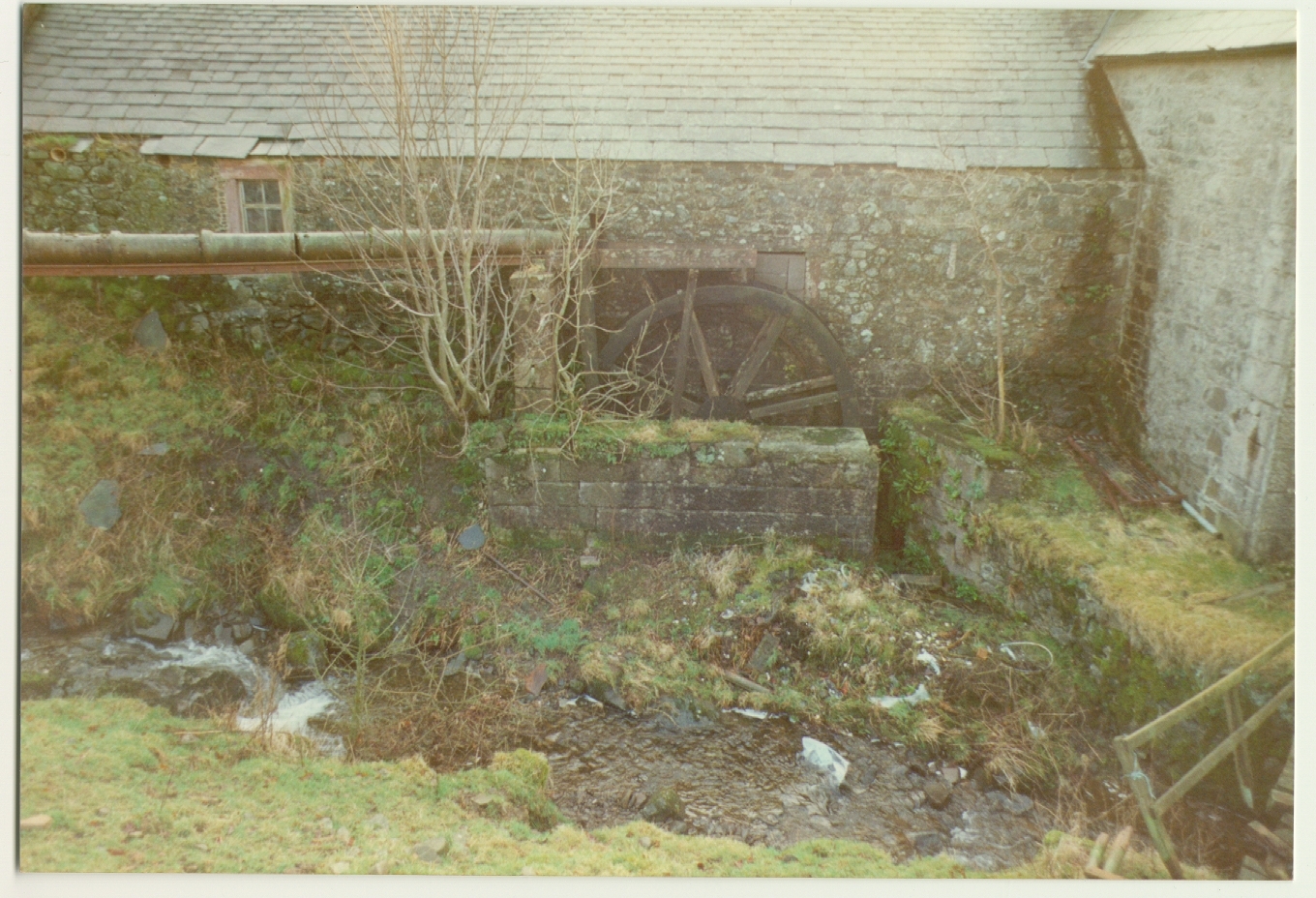 Auchenbrack still has its mill dam, which stored about an hour’s water and you can see where the mill wheel was attached to the farmstead. The pond was dredged in the mid-eighties, but has almost silted up by 1996. The water wheel was still in use in the 1950s for threshing and bruising oats, but it was killed off by the arrival of electricity.

At Ford the old millpond has been cleared out, deepened and redammed in 1995. Buccleuch’s map of 1853 shows the millpond clearly.

At Bennan the Bennan Burn was dammed. The old millpond and the clay pipes are still there. The mill was in the corner of the present buildings.

At Dalmakerran there is a millpond just above the house, close to the road.

Clonrae’s millpond is marked on the 1850s OS map and the 1853 Buccleuch Estate map below, but there have been so many alterations at the back of Clonrae that it is hard to tell now where the pond was. 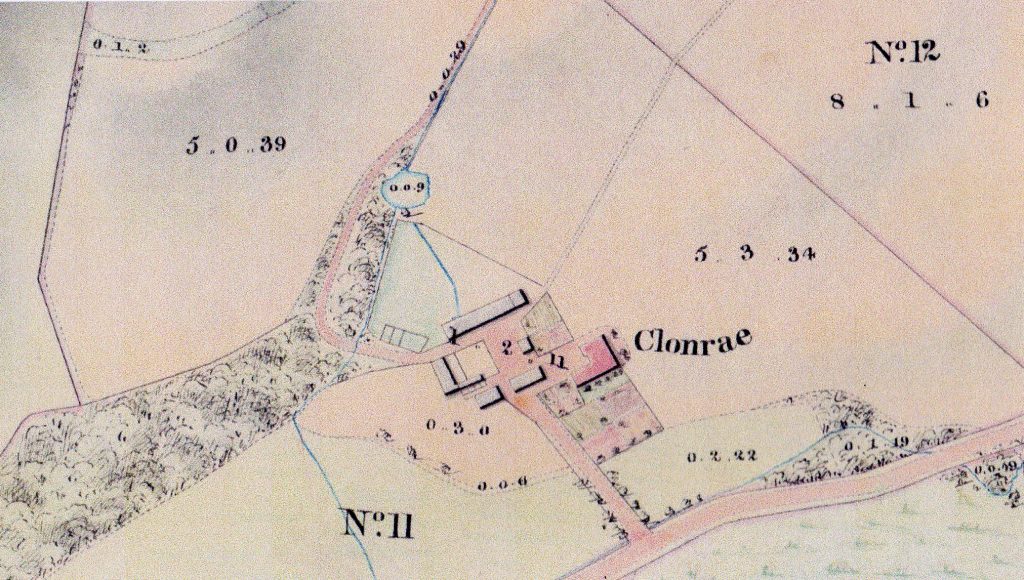 Macqueston had a corn mill in 1747, but even earlier it had a waulk mill for fulling woollen cloth. At Macqueston the mill was still used in 1958. The millpond was just south of the farm buildings.

Another corn mill in 1747 was at Airdmill, known now as Milnton. There is nothing to be seen at Milnton now, except traces of the old lead running from the manse. Though it was no longer in use by then, Airdmill is still the name in the 1851 census. The Pont map of 1590 and other sources called it Miltoun and it was mentioned as early as 1633.

The site of a millpond can still be seen above Kirkland, just below Auchengibbert Wood. The lead runs through the garden, emerging below the Linn road.

The layout at Stenhouse around 1850 can be seen from the old OS map below. The mill lead for Stenhouse was fed from a caul across the Shinnel and can still be seen between the glen road and the Shinnel. It runs behind the Millhouse, where there was a water-driven sawmill still working in the 1950s, for which the machinery still lies in situ in the shed at the back of the Millhouse.

Another lead runs from this one and into a now often dried-up millpond by the glen road at 799930, which fed another wheel in the steading, which was used this century from 1908 for generating electricity. This was installed by Drake and Gorham of Glasgow, using the existing waterwheel.

In 1747 there had been a corn mill at Stenhouse. It seems, in fact, that all tenants in Tynron were once thirled to the mills at Stenhouse, Macqueston and Aird. Low Lann, Strathmilligan and Auchengibbert even had horse-driven mills in 1897 for threshing and churning. 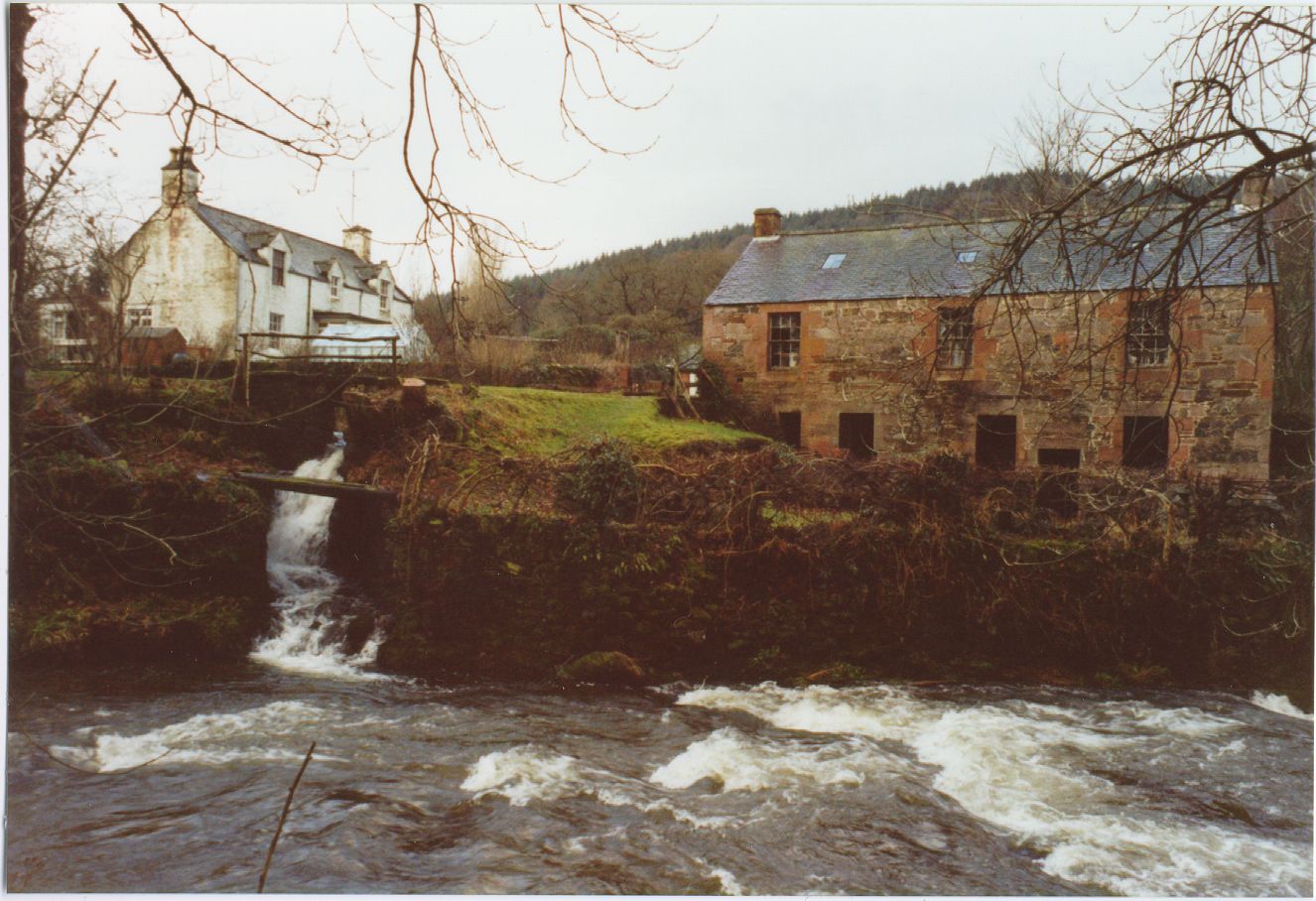 Shinnel Forge was the one real industrial site in Tynron Glen. About 1840 William Cotts built a wonderful two-storey mill building beside the Shinnel. He dammed the river and diverted it via a small millpond on to a 16 foot breast-shot wheel, which he used to provide power to hammer out peat spades, shovels and plough parts. Blacksmith’s hearth and working bellows remain for the forge. Cotts had started at Penpont, but moved to this better site. As can be seen from the 1850s OS map, Hulton Burn was also diverted to feed the mill. Access to the forge was from Penpont direction. 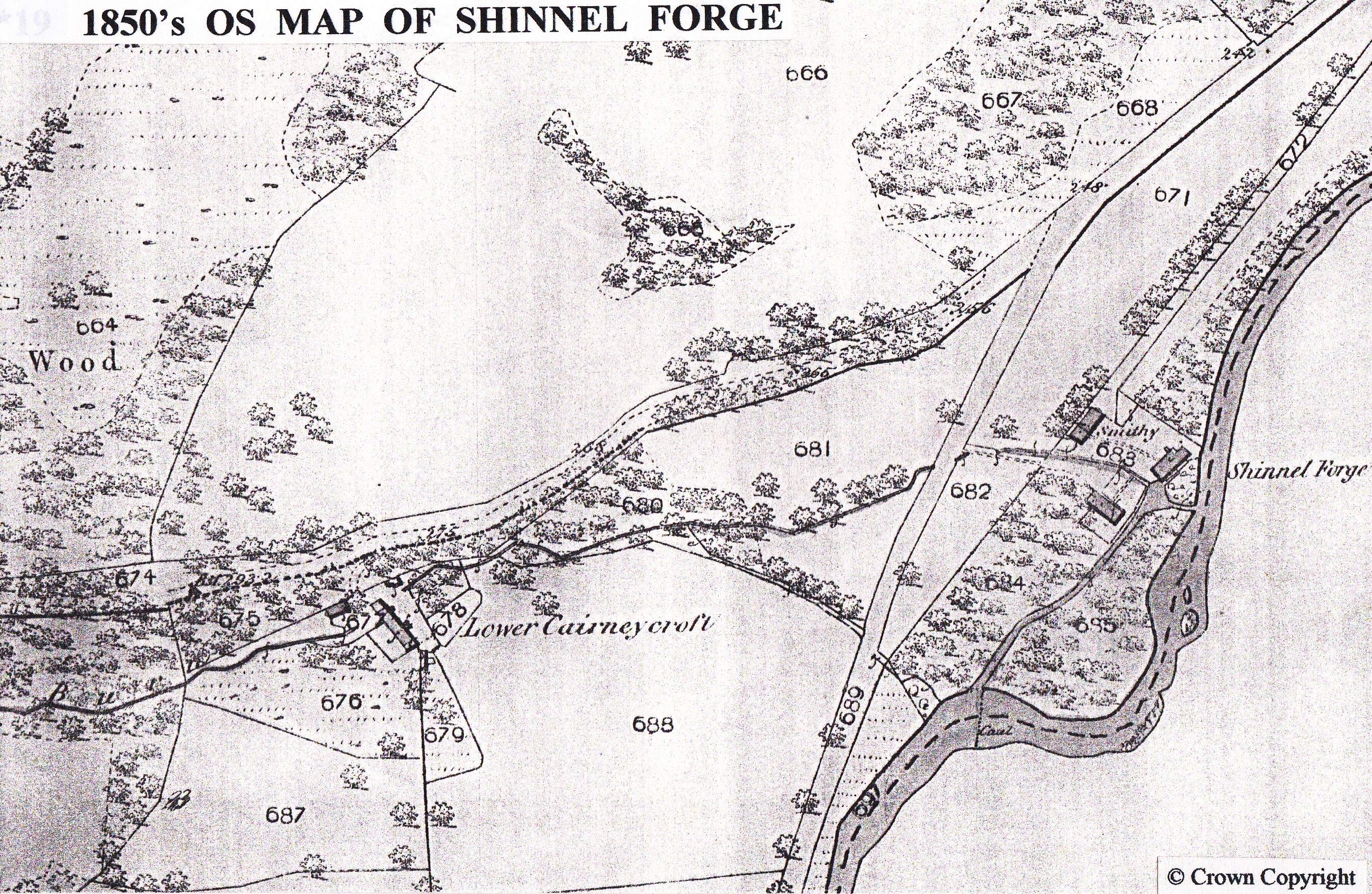 Presumably the iron ore came from the Dalmellington area. Though ore was expensive to transport on poor roads, the products made were only small. Many lumps of iron slag remain in the river.

Cotts died in 1878, but his descendants continued to do well in the iron industry. First they moved to Sanquhar in 1874 to make larger objects, including parts for Glasgow shipyards. William’s son, Mitchell, was knighted and given the freedom of Sanquhar.

After 1880 John and James Penman of Sanquhar became tenants of Buccleuch at Shinnel Mill. They converted the mill to saw wood and bend iron for wheel rims, as they were coachmakers and joiners. J and J Penman must have closed down between the wars, but Penmans lived on at Shinnel Forge. In 1952 John Penman bought Shinnel Forge from Buccleuch. Penman Engineering is now in Dumfries. I have been told that there is a family connection, but Penmans are uncertain about their earlier history.

Brian Turner bought Shinnel Mill in 1973 and has tried to keep the mill buildings in good condition. He has turned this corner of Tynron into a haven for birds and wildlife, including red squirrels.