The latest great Ice Age began something over a million years ago and, of course, is still with us. For 900,000 of the last million years Southern Scotland has been buried by ice. During this Pleistocene Period Tynron Glen has been subjected several times to Arctic conditions and completely submerged by very thick sheets of ice. This was not one continuous event, as the ice melted away for the long intervals of the interglacials (such as we are in now), during which the climate was often even warmer than nowadays.

Each glaciation would have started with an accumulation of snow and ice in the Galloway Hills, producing tongues of ice. One of these extended down Tynron Glen, but later expanded and coalesced into a continuous ice sheet with worsening of the climate.

Tynron Glen already existed before the Ice Age, but the ice has given it all its detailed land forms and caused, I believe, some changes in the course of the Shinnel.

The last Glacial Period began about 70,000 BP (Before Present). The last great build-up of ice started 25,000 BP and was at its maximum a mere 17-20,000 years ago. Deglaciation was rapid and the last ice left the tops of the glen hills some 10-11,000 BP. What can now be seen in the glen is what was left by this last great ice advance and retreat.

A thick ice sheet was responsible for rounding off the tops and the spurs of Tynron’s hills and removing all the soil. When the ice melted away, the tops of the hills were bare rock. There are no rugged mountain peaks because this area was already low enough to be completely covered by the ice sheets.

The ice ages all began with tongues of ice pushing down the glen, widening and deepening it. The truncated spur at Craigencoon and the crags at Craigturra, Tynron Doon and Croglin were formed by the edge of the tongue of ice which was occupying the lower ground. The cauldron-like valley-heads of the Shinnel, Appin and Kirkconnel rivers can also be explained by the action of glaciers. They resemble the much more impressive corries of further west in Galloway and in the Highlands. Jagged fragments of rock embedded in the edge of the glacier gouged scratches or striations on rock exposures on the valley sides and floor. These show the direction the glacier travelled.

Other important glacial influences lie in the deposits that cover so much of the lower ground in the glen . The floor and a lot of the valley-sides and hollows are covered in till (also known as boulder clay or glacial drift), either laid down beneath the moving glacier or left as the glacier melted and deposited its contents of rock on the ground. The till is brown or brownish-grey and consists of everything between small stones and large boulders of greywacke, angular and sub-angular, haphazardly mixed in a matrix of clay or sand.

In some places it is arranged in small egg-shaped knolls with their long axes running down the glen in the direction of the ice. Craigencoon cottage is sited on a feature of glacial deposition big enough to be called a drumlin, but the many smaller ones are best seen around Auchenbrack, on the slopes of Court Hill or on Cormilligan Bottom. 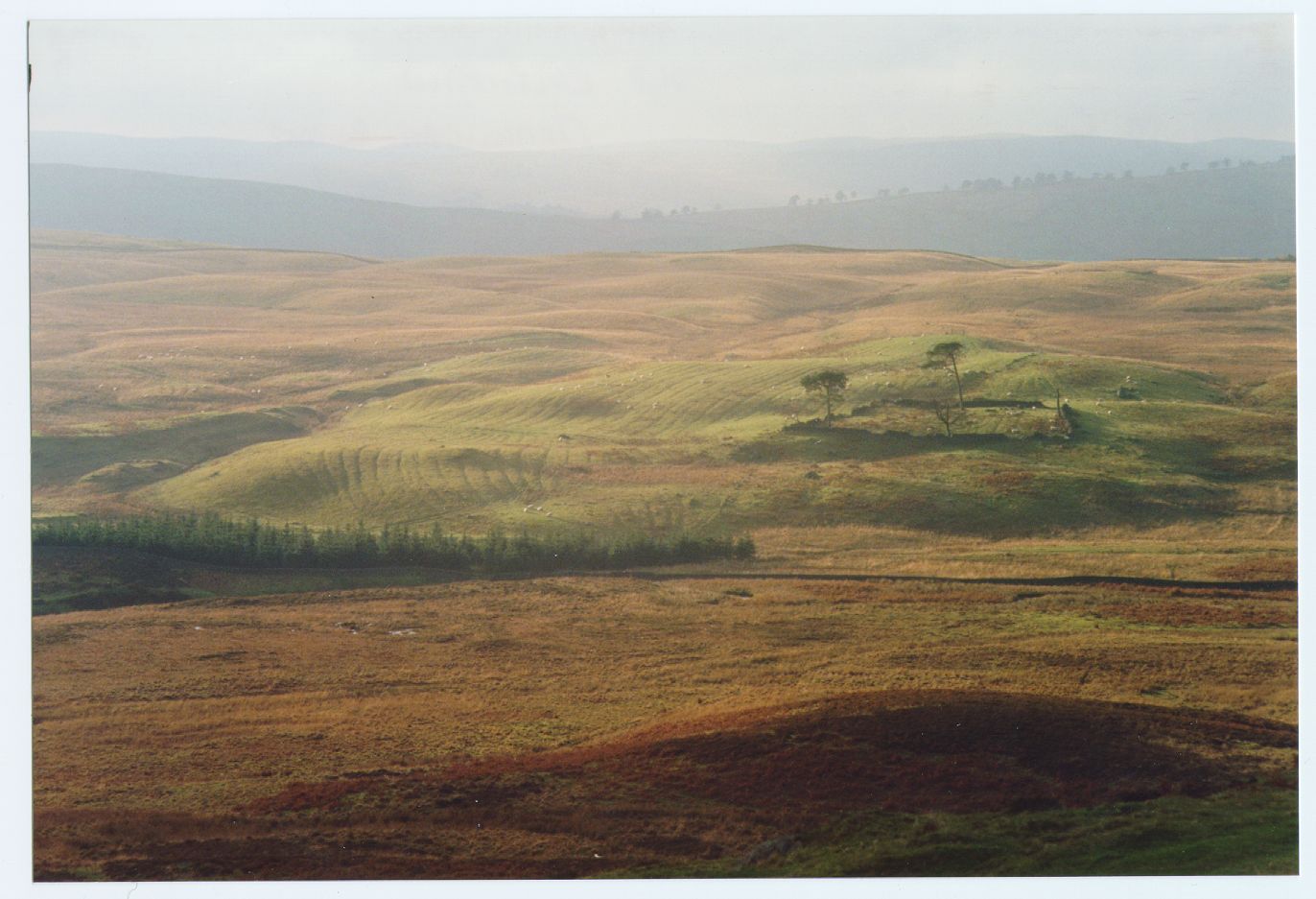 The large area of Cormilligan Bottom up Kirkconnel Glen is covered in these depositional mounds, as shown on in the image above and they make it a really hummocky bottom.

Where cut into by rivers or machinery, the contents of these knolls can be clearly seen. The forestry quarry just north of Appin has a superb section.

The overall effect of all this deposition was to fill in the valley floor and all the basins and hollows along the glen sides. As can be seen from the geology map, well over half the glen is covered in glacial till and the bedrock is often many metres below.

While the ice was retreating 10,000-11,000 years ago, the glen must have been awash with meltwater every summer. The Shinnel must have been braided and would have flooded the flat areas of its valley floor. Alluvium was spread across the valley floor.

Some of the valley bottoms may represent the beds of lakes temporarily dammed by glacial deposits, notably the lovely flat land by Tynron village. In this case the dam would have been in the vicinity of The Linn, where the flat land ends downstream and the glen narrows. The Linn would have been a waterfall initiated by the overflow from the lake. The Linn is the best of several waterfalls and is probably the best place to see salmon leaping. There are still salmon leaping there in autumn 1996. The waterfalls below Appin, where Appin Burn tumbles into the Shinnel, are also splendid, yet far more secluded.

Since glaciation the lakes quickly filled in with the mass of loose debris existing on the glen floor washed into them by the main Shinnel and by the new burns formed on the valley sides. Some of these burns have carved impressive gullies, even gorges, in just 10,000 years, as they have cut down through a few metres of glacial debris on the valley sides and reached bedrock. There is much hidden beauty in these wonderful cleughs. My favourite is March Burn on Auchenbrack.